All Collections
All Help Articles
Distribution
How to get your tracks on TikTok... And what to do when you get them there!

How to get your tracks on TikTok... And what to do when you get them there!

Lil Nas X's rise from total obscurity to number one hit in a matter of months was the big music story of 2019. Social media video app TikTok was heavily credited for the success of his breakthrough track Old Town Road.

Millions of TikTok users have taken part in the 'Yeehaw Challenge' in which they record themselves transforming into cowboys as the beat drops in Lil Nas X's song.

The viral spread of the challenge translated into streaming and chart success for Old Town Road. On the day Lil Nas X signed to Columbia Records, he had already amassed over 25 Million Spotify streams as an independent artist and stood at No. 51 on the Billboard Hot 100.

Artists around the world are now desperate to join the TikTok bandwagon and get their music going viral.

So why is distributing to TikTok such an attractive prospect for artists?

1. You get Shared -  Your music can get put in front of millions of new listeners.

2. You get Credited - Your Artist Name and Track Title appear whenever a video is shared with your track. 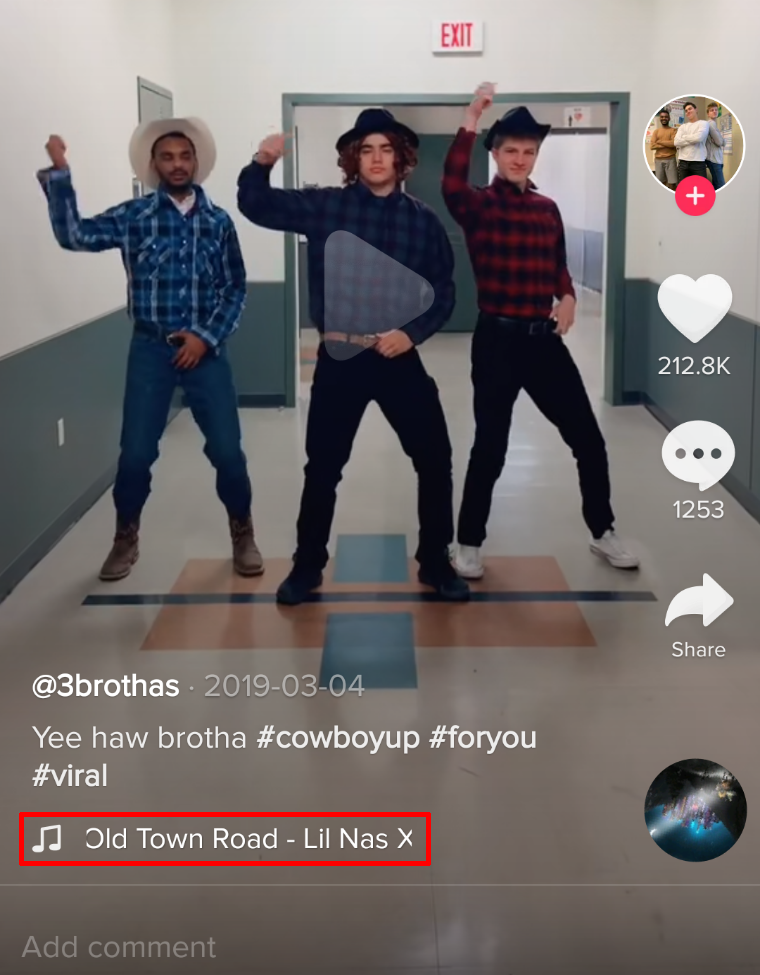 3. You get Paid - You earn money every time your music is used (more on this below).

4. You get Interactive with fans- It's a great way to get your fans actively creating content to promote your music.

Getting your tracks on TikTok

You can get your music on TikTok at the same time as you distribute to all the other streaming platforms. With Beatchain's Distribution, you choose your TikTok settings at the end of the submission process.

TikTok Sounds Library does not use whole songs, so you will need to pick a 30 second section to be made available on the platform. 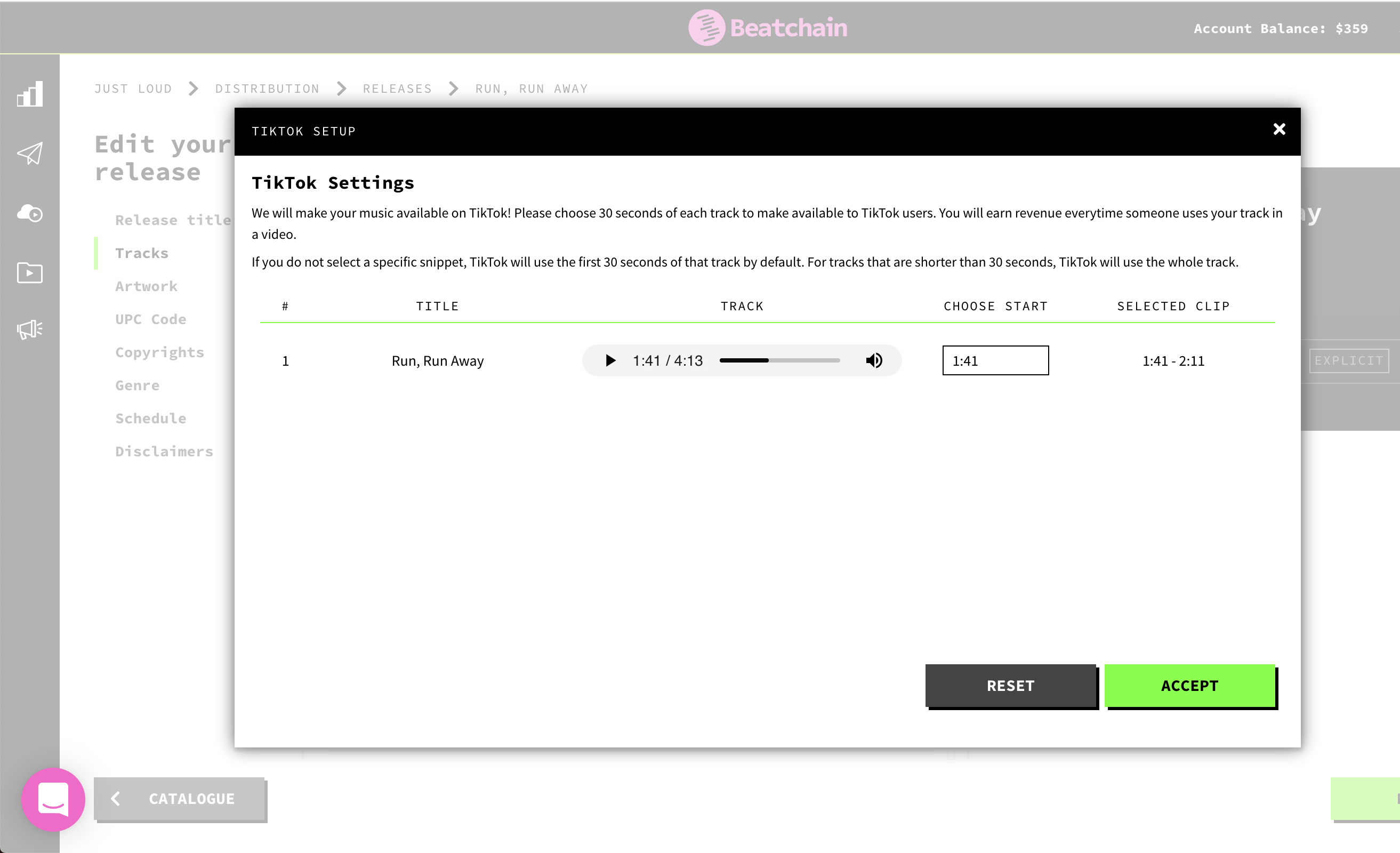 To give your clip the best chance of going viral, you should pick a part of the song that you think is the most shareable and will capture the imagination of TikTok users. We recommend choosing a section that either:

When you've chosen your section, submit your release and your track will appear in the TikTok Sounds Library on your chosen release day!

Then what?
Right, that was the easy bit! Now the hard work starts. Your song is not going to blow up all on its own, so you need to get people sharing it!

Make a couple of your own TikTok videos using your track to get things rolling. Try a few different interpretations of your lyrics. Here are a couple of examples for inspiration:

Remember to share your videos with your fans across your other social media pages, so you can...

Get interactive with your fans! Challenge them to make their own TikTok videos using your music! The more people you can get using your track, the more likely it is to go viral. Make sure you share the best fan-created content to all your social media channels to encourage more fans to join in!

Find TikTok users with large followings and convince them to use your track in one of their videos. If you cannot contact them via TikTok, try searching for them on Instagram, Facebook or Twitter, and send them a direct message. Don't beg! You need to convince them that your track will help them make some great content!

If you're prepared to put some money behind your music, a number of TikTok influencers get paid by artists to use certain tracks in their videos

How Do I Get Paid?

Unlike most music/video streaming services, you don't actually get paid per listener. Instead, you get paid for the number of videos your song appears in. This means you will earn the same royalties from a video with millions of views as you will from a video with just one!

The advantage of the video with millions of views is that it should inspire more people to make their own version!

Don't get too carried away by the prospect of TikTok royalties. Streams do not pay as well as physical CD sales and digital downloads used to, and artists shouldn't consider earning royalties as the MAIN reason for distributing their tracks. Instead, it's important that you turn as many listeners as you can into fans. See this article for more info.

We've observed that viral success on TikTok does seem to spill over into other music streaming platforms. Tracks that get used in videos over and over again get searched for A LOT on Spotify, Apple Music and others, so make sure your song is available to stream! 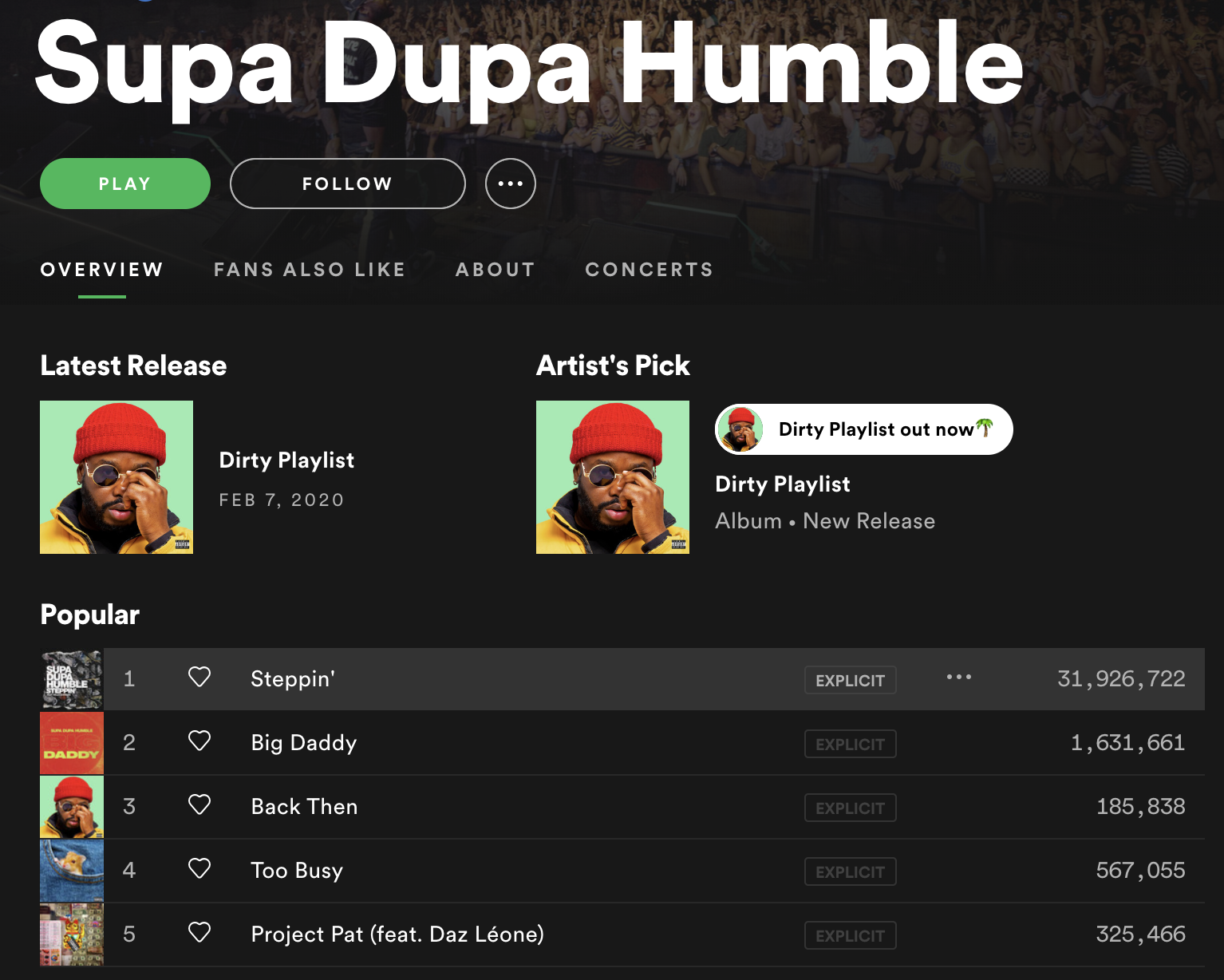 Steppin' has been used in millions of TikTok videos

Though we think of certain tracks as innately catchy, it often takes a couple of plays before we realize we like a song. In the old music industry, labels would pay millions for TV ads and radio play to hit the public with the same song until it caught on.

The advantage of a successful TikTok video is that it recreates this effect without paying the millions! If it goes viral, people are going to be hearing your track over and over again, giving you more and more chances to get it stuck in their heads.

As the videos are short, you can make sure the part people hear is The Hook - the catchiest part of your song - to further increase your chances. TikTok videos also play on a loop, so if a viewer immediately rewatches a video, they'll hear your hook twice or more!

It's an exciting time for independent artists. Viral content is making it possible to get tens of millions of streams without the financial backing of a major label.

It's all part of a greater technological revolution in the music industry. The tools are available for artists with the creativity, personality and drive to get a big hit whilst holding on to their independence.

Lil Nas X may have signed to a major in the end, but just consider the negotiating power you can take into those discussions when you've already achieved chart success.... the appeal to take your pick of the labels and the self-sufficiency to say "No, I don't need you."

Power is shifting to the creators, and the old industry is scrambling to keep up.

Want to be the next viral sensation? Start distributing to TikTok for free!

Did this answer your question?