Picking the right credit for your collaborators

When adding your collaborators to the metadata of your release, it's important to get to grips with the terminology to make sure you're not giving anyone too much or too little credit!

What's the difference between Featuring and Primary Artist?

When you consider the planning, songwriting, recording and everything else that went into the song, is it:

If option number 2 makes sense, then your collaborator should probably be credited as a Primary Artist on the track.

As a courtesy, you should always clear this with your collaborator before you start the distribution process!

As the Beatchain account holder, you will always appear as a Primary Artist on every track.

Releasing tracks with many artists

Be aware that adding 4+ Primary Artists to a track will cause it to display as Various Artists on some streaming platforms. You will also not see the release or be able to pitch it in your Spotify for Artists account.

To get around this, you can remove Primary Artist(s) or change them to Featuring Artists.

How do I credit Producers, Songwriters and other Contributors

Generally, it's only the recording artists who are given "Artist" credits on a track.

For other contributors, such as the people who wrote, recorded, composed, mixed, produced etc. there is a different place in the metadata to credit them. 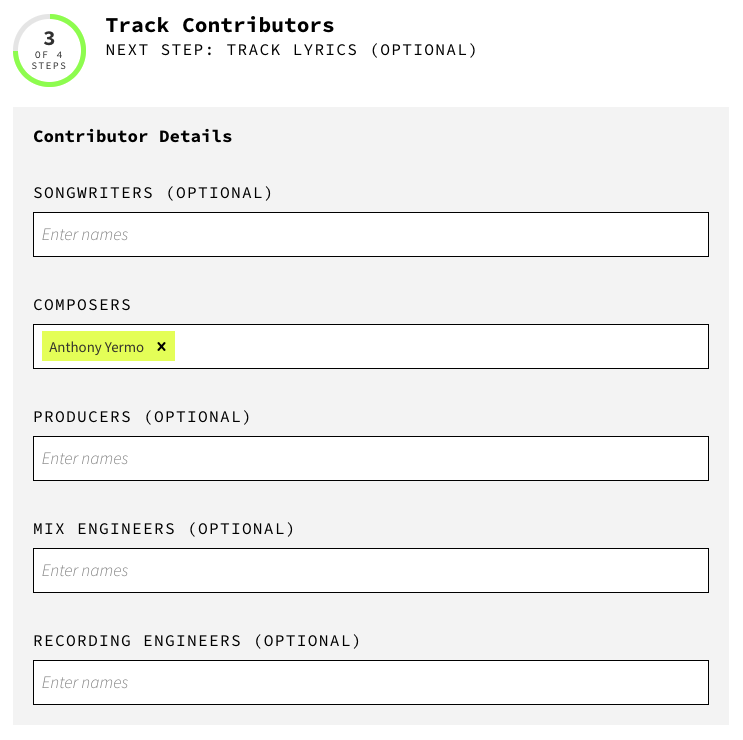 There will of course be some exceptions, and some contributors will have played a prominent enough role in the making of the track that they can be considered one of the main artists.

For example, someone who calls themselves a producer might just be appointed to produce a track for an artist, and will only need a producer credit. On the other hand, they may be an Artist with production skills, involved with a lot of the composition and creative decisions throughout the whole process, and may expect to be included as a Featuring or Primary Artist.

The key is to just be upfront about it, and make sure everyone's happy with the credit you plan to give them at the start of the process!

Release Checklist
Did this answer your question?